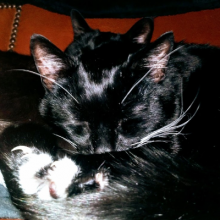 For here, maybe the most useful thing to mention is that I'm dyslexic. (I was told, in my thirties, by a learning support tutor at University. Not my tutor – she was a fellow employee. I was doubtful, at first, because I'm OK with spelling … after I read some books on the subject, various things from my past began to make sense.)

I don't think of the dyslexia as a disability, however it does shape the ways in which I learn. Critically:

For my sanity: I'll sometimes mentally block documentation, if there's that risk of wrongness, which might be not what you want to hear from a doc committer, but there it is :-)

I rarely mention the dyslexia, so that's a bit of weird introduction, if you never met me in person. Better to think of me as a cat man, and …

… a nano man. Truth: I nearly wept when I found myself presented with vi in mutt on freefall.

Please, can you provide a full diff?

Grammar. Simplest to drop the word chapter, then ready to land :-)

Can I go ahead with these changes …

Condensed notes to self, whilst being mentored

May want to add docs as a group reviewer?

Since there's work towards describing ZFS boot environments as a feature of FreeBSD https://reviews.freebsd.org/D35823, shall we:

I'd add ZFS boot environments. Does this spark thoughts of other significant features that might be missing from the page?

The raw diff from Phabricator didn't work for me with git-apply(1).

Given the transition to OpenZFS:

Hi.
About the news part, I suggest you add yourself there; …

Some more outdated references to 11.3, and so on.

A few suggestions. Hopefully not contentious. Thanks

:-( this is unexpected, I don't recall clicking Continue.

This comment is based on my limited experience, the one line:

grahamperrin added a comment to D7665: Rewrite the Updating from Source section of the Handbook.

TIL: the host audio driver can be changed for the saved state of a running machine.

grahamperrin added a comment to D28062: UPDATING: Change update procedure to use etcupdate(8) over mergemaster(8).

grahamperrin added a comment to D28871: Update virtualbox to 6.1.18 and repocopy version 5 to -legacy ports..

grahamperrin added a comment to D23817: Fix build of x11-drivers/xf86-video-ati-legacy.

Does the recent removal of graphics/drm-legacy-kmod make this review redundant?